Doug’s presentation was a part of a larger media briefing where Chief Saunders, and Deputy Chief Yuen, announced the rollout of the Enhanced Neighbourhood Officer program to 35 neighbourhoods across the city of Toronto. Humber’s evaluation of the Neighbourhood Policing program began in 2014, and since then, recommendations made from the final report evaluating the initial phase of the project have been adopted by the TPS into the enhanced model, launched in October 2018.

While the project’s findings have resulted in important changes to TPS practices, it has also provided FSCS students with the opportunity to work as Research Assistants. The project’s two RA’s Trisha Harber and Dominika Kubica were also able to attend the media briefing. Watch the full briefing on YouTube here. 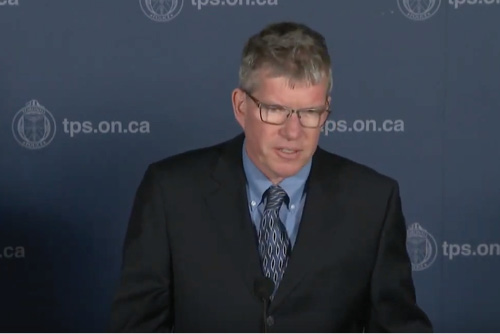